The labor market for software engineers is seeing a talent shortage since the number of job positions has surpassed the number of people qualified for these posts. According to Evans Data Corporation, there were nearly 4.4 million software engineers in North America in 2019. Due to a talent shortage, companies offer higher salaries and better benefits to attract and retain the best talent. 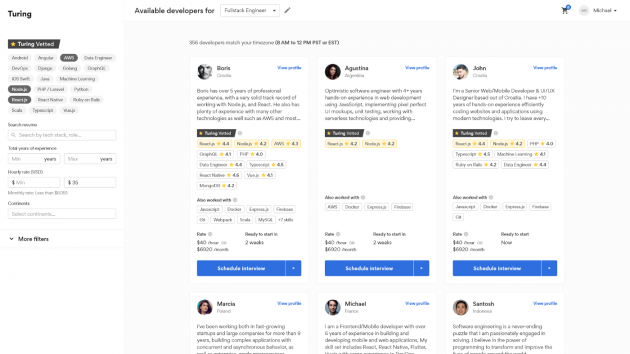 The average salary for a software engineer in the United States is around $116k depending on the location. Obviously, in Silicon Valley, the average salary is much higher. The best solution to this problem is to hire remote talent, which is just as skilled and professional but costs much less. Turing enables startups and Fortune 500 companies to hire vetted remote developers from Brazil, India, Russia, and other countries with a very high level of technical expertise and significantly lower cost of labor and recruiting than in the US

We at Peak State Ventures invested in Turing in Series B in the summer of 2020. We are happy to announce that Turing has just secured $87m at Series D and became a unicorn. Since our investment, Turing has started working with large enterprise customers such as Johnson & Johnson, Dell, Disney, Rivian, Plume, Coinbase, and VillageMD. Turing’s platform is very different from Upwork and Fiverr, where customers have to manually go through the job posts and vet the candidates themselves. Turing does all of this for them, presenting hiring manager vetted talent that is ready to take on the vast variety projects

A million programmers were on the Turing platform in October 2021, a two-fold increase since June 2021. Here is what Turing offers to companies intending to hire a remote workforce:

1. Qualified candidates. Turing algorithms and the team of experts vet developers over five hours of interviews and testing. All the hiring managers have to do is to specify their requirements

2. Fast hiring. According to Glassdoor’s report, companies in the US take about 23 days to fill a position. Some industries have more lengthy hiring processes. Turing spends 5 days on average to hire an experienced developer as it has a large pool of developers who are already skilled and qualified for the job

3. Variety of skills. Companies can hire talent with more than 100 skills, including but not limited to React, Python, Angular, Swift, Node, React Native, Java, Scala, Node.js, SQL, and Laravel

4. Trial period. Companies can work with provided engineers in the testing mode and decide in 2 weeks if they want to pay for the work done and continue engagement. More than 90% of Turing trials are successful

5. Back office support. Once a company starts working with remote engineers, Turing takes care of international payments and legal compliance

Turing CEO Jonathan Siddharth has built the company that democratizes the labor market. Large enterprises and growing startups can lower their research and development costs while software engineers in other countries get a chance to work with top US companies without having to leave their home country. If you are looking for top-tier engineers for a fraction of their cost in Silicon Valley, try Turing

Seva Zakharov,
Partner
Seva works on early and growth stage investments across all verticals of Peak State Ventures focus. Prior to Peak State Ventures he developed corporate strategy for Apttus and Severstal and worked as an analyst at Citigroup. He holds an MBA from INSEAD
Follow me on linkedin.com